Transitioning Well as a Leader

By Outcomes Magazine | InterVarsity’s Tom Lin reflects on lessons along the way. 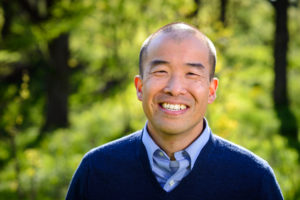 Lin became president in 2016, the first full president to be chosen from InterVarsity staff.

From 2002 to 2006, Lin helped establish an evangelical student movement in Mongolia and served as the country director for the International Fellowship of Evangelical Students in Mongolia. He and his family moved back to the US in 2006, settling in St. Louis to become Regional Director of InterVarsity’s Central Region. From 2011 to 2016, he served as Vice President of Missions and Director of the Urbana Student Missions Conference.

From 2005 to 2014, Lin served as a trustee and vice-chair of the board of Wycliffe Bible Translators, and has also served on the boards of Missio Nexus and Leadership & Legacy Foundation. He currently serves on the boards of Fuller Theological Seminary, the Crowell Trust, and the Lausanne movement.

Tom Lin is the author of Pursuing God’s Call (2012) and Losing Face, Finding Grace (1996), as well as co-editor of the Urbana Onward book series (2012), and a contributor to Still Evangelical (2018), all published by InterVarsity Press. Tom is also a contributor to Uncommon Ground (2020), published by Thomas Nelson. He has a BA in Economics from Harvard University and holds an MA in Global Leadership from Fuller Theological Seminary.

Can you reflect on keys to your successful transition in InterVarsity’s president/CEO role?

It’s important to intentionally prepare both the individual leaders and the organization. This happened for me in several ways prior to our transition. As an individual leader, I was given a stretch assignment beforehand. I had previous director-level responsibilities in various departments, but I was given a stretch leadership assignment in a national role: serving as Vice President of Missions and Urbana Director. Having that experience—managing finances, operations, budget, personnel, an organization-wide initiative, as well as serving on the Cabinet (most senior executive team) —was invaluable in preparing me as a future CEO.

Another key was the encouragement to join various boards. I joined the boards of Wycliffe Bible Translators, Missio Nexus, Lausanne Movement, and Fuller Seminary. These governance roles equipped me to think at the organizational level and greatly expanded my capacity for executive leadership.

Finally, I joined a cohort of prospective senior leaders—a group of 15 senior leaders with potential to serve at the executive level. Even though only one person can serve as president, that cohort gathered people together who eventually, one day, would be working together as a community of national leaders, and this prepared our organization for a successful transition. When I came into my CEO role, many of them transitioned to new executive roles as well. So even as I began leading individually, we also began leading as a community—a group that had already prepared for this moment together.

You were the first president/CEO to be chosen from within InterVarsity staff. What unique advantages or challenges came with being promoted internally?

One funny one is, everyone already had my cell phone number! Anyone could text me because I was a known quantity with a lot of pre-existing relationships. One advantage is that you know who to talk to, who can help get certain things done. The flip side of it is, everybody knows they can talk to you as well.

Another challenge is the temptation to be stuck in the same mental models, the same boxes that you've always thought in. Because I was part of InterVarsity’s executive team for five years prior, that's five years of an established way of already working and thinking. So, how do you break out of those boxes? That can be a huge challenge for any senior leader.

In terms of advantages, even before starting as president I could see the landscape of where we might need to go, and what immediate things we might need to address. I didn't have to earn trust; I could start executing right away. I could take on some initiatives immediately without having to get to know the organization.

I also already knew how to navigate InterVarsity’s unique organizational culture, essential for any CEO of Christian nonprofits. Being able to navigate our organizational values and our unspoken ways of relating came a bit more quickly for me, which helped immensely.

What do you see as keys for any leader to transition well into a new leadership role?

One key in transitions is to assume you know nothing and tell others to assume that you know nothing. It’s so important not to stifle the beginning part of transition—the data gathering, learning, and listening. It's the only time in a leadership transition you can have genuine, open conversations about current reality and what’s truly important. It's like a honeymoon period, and you want to take advantage of that time to listen and learn.

For me, I wrote down a list of 50 people that I needed to interview who were internal and external stakeholders. I told them, "Talk to me about InterVarsity, and assume I know nothing. What do I need to know?"

I also think honoring the outgoing person well is important, if possible. You want to be mindful of their experience and their impact in your organization. You want to give them good closure in their role because if you don't, that can come back to you later in some unexpected or unhealthy ways. In my transition, I benefited from ongoing quarterly phone calls with the outgoing CEO.

Lastly, it’s critical to clarify and communicate the values through which you're going to lead. It's amazing how people interpret transitions. If you don't say anything about your leadership values, people make assumptions—either that things are going to be the same, or that things are going to be drastically different. The lack of information can sometimes be challenging for people, so you can help people interpret the transition by articulating what your values are.

How have you been able to communicate vision and implement strategy for InterVarsity during the past five-plus years in this role?

Communicating vision is vital for leading well. I shared about that in an Outcomes article from earlier in my tenure—establishing urgency, building coalitions, embodying and over-communicating vision—and I’ve continued to see the value of those principles in the years since.

I was fortunate to be able to appoint a new leadership team when I began, and together we discerned where the Lord wanted the ministry to go. I think every new leader needs to be able to ask, in a community of trusted leaders, “What is our current reality? Where are we going to go?” I did that with our leadership community, and the Lord met us powerfully through that time. What we call our 2030 Calling—our vision for every campus in the country to have a gospel movement by 2030—came from our time together in prayer and discernment.

Can you share some of the key ways that InterVarsity is doing ministry today? Where are you seeing transformational kingdom impact?

I am very hopeful about campus ministry right now. I see students who are hungry to study Scripture and to pray and to share their faith with their friends. They may do it in different ways than previous generations, but they are passionate.

Over 30 percent of students who come onto campus today identify as agnostic, atheist, or no religious belief. While some mourn this fact, we also think there's a positive side. They have no misconceptions of Christianity, since they have not heard the gospel before; at the same time, they’re very much open and longing for something supernatural. Students today carry their spiritual hunger in plain sight, but they don't know how to satisfy it. It’s an incredible opportunity to reach this student generation with the good news of Jesus.

What are you most excited about as you look to InterVarsity’s future?

I’m most excited by the powerful moves of the Spirit I see on college campuses. We’re praying with deep hope and expectancy for revival on campus—a season of breakthrough in word, deed, and power that ushers in a new normal of kingdom experience and fruitfulness. And by God’s grace, we’re seeing that happen.

One example from just last week: at the University of Colorado-Boulder, the InterVarsity campus minister invited the football team to a Bible study. Not surprisingly, many of the players who showed up were on injured reserve. They asked the staff to pray for their injuries, and as he prayed, these football players—to their amazement—began to get healed. Soon the whole football team was coming to this Bible study because they heard about this! It’s extraordinary, and we’re hearing many other similar stories from across the country.

I’m also deeply excited about the partnerships that we’re developing. Together with Cru and many other partner ministries, we launched the EveryCampus movement which, to date, has mobilized volunteers to pray for a student movement to be planted at every campus in the U.S. We’re also partnering more deeply with local churches than ever before. I think this new commitment to partnership will dramatically change the landscape of campus ministry.

What encouragement would you share with other ministry leaders today?

We serve a God of hope. In a season of increasing polarization, increased marginalization of the church, increased pressures in secularism, or pluralism, all the challenges that we face as leaders—do not lose heart.

To lead in today's environment requires humility and standing firm together in the gospel. Both are difficult. The words of 1 Peter 5 say it so well:

“All of you, clothe yourselves with humility toward one another, because ‘God opposes the proud but shows favor to the humble.’ Humble yourselves, therefore, under God's mighty hand, that he may lift you up in due time… And the God of all grace…will himself restore you and make you strong, firm and steadfast.” (1 Peter 5:5, 10)

The Lord is at work in the things we see and the things we don't see. We may not know the answers, or have all the capability, but we serve a God who does. And that’s the anchor of our hope.