By Rick Dunham | They’re not who you think they are

There is a lot of conventional wisdom circulating about millennials compared to other generations, including…

Like usual, the conventional wisdom isn’t all that accurate, as we found out through our study of millennial donors here in the U.S. While there were a number of things we learned, let me highlight four key findings.

Before we jump into those findings, however, let me give you a bit of background related to millennials and charitable giving.

It’s important to remember that the oldest millennials are just 35 with the youngest just 17, so it’s impressive that one out of ten have given to charity, making up 11% of all individual donations. And the amount is significant as according to Giving USA, individual donations totaled $282 billion in 2016, which would mean that in 2016 alone, millennials gave over $30 billion to charity.

When looking at the average amount given per donor in each generation we discovered what one would expect. The generation giving the most per donor is the boomer generation, followed by matures, Gen Xers and then millennials.

The amount millennial donors give is similar to other generations when they were at this stage of life. For example, in the Women Give 2016 report, the authors showed that the pre-boomer single women gave about the same as millennial single women and millennial married couples slightly less. At the end of the day, it’s about discretionary income, which millennial donors have much less of.

For example, in a whitepaper prepared for our Dunham+Company millennial donor study, Wes Gay, who is a Forbes Under 30 Contributor, points to the specific financial challenges the Millennial generation is facing that are most likely impacting their charitable giving. These include significant student loan debt and wage stagnation. So this younger generation is facing stiffer headwinds than most others.

There are a number of findings from the study, but as I mentioned above, four in particular stood out. Here they are.

There is a major narrative in the marketplace that Millennials are not as engaged in faith as other generations or are increasingly unaffiliated with religious bodies. But our study uncovered a very different story with millennial donors. As you will see in the chart below, 25%, or 1 out of 4, millennial donors say they attend religious services once a week or more. That’s comparable to Gen Xers and boomers, 27% and 28% respectively, who say the same thing. Church attendance only jumps significantly with matures, at 36%. And they are much more engaged in church than their counterparts in the U.K. and Australia. 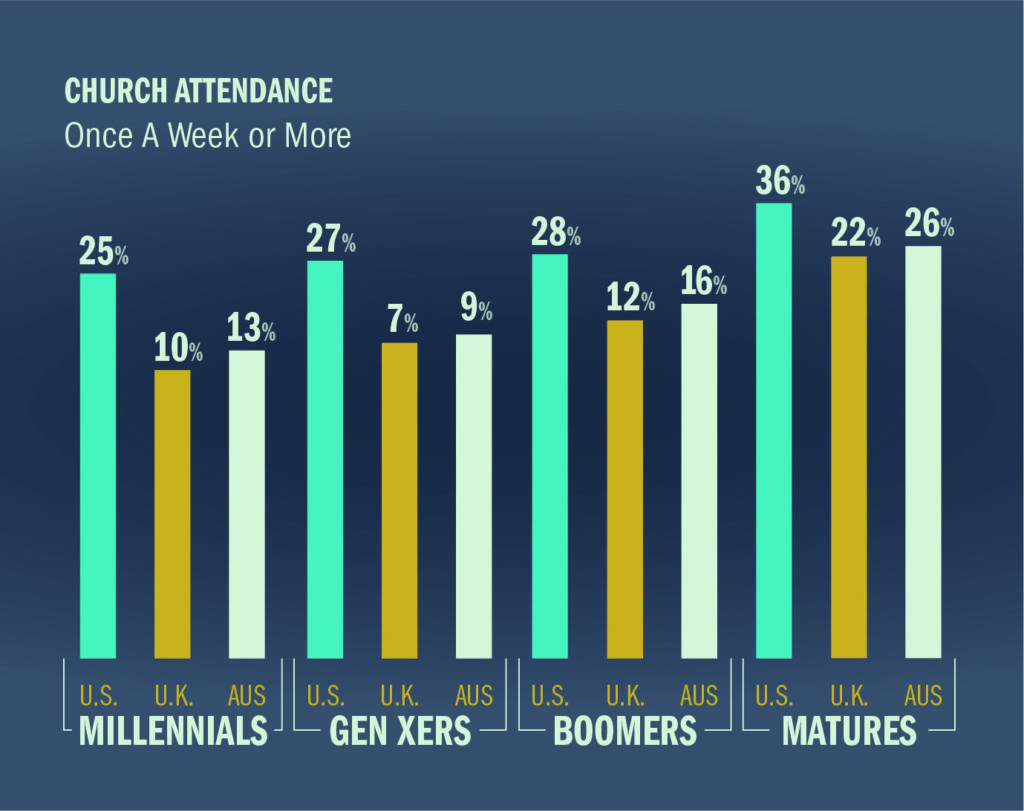 Again, there is a common myth that millennials are much more likely to want to engage as volunteers. Knowing that there is a high correlation between giving and volunteering we asked millennial donors how much they volunteered. As you can see from the accompanying chart, there really isn’t much of a difference between millennials and other generations when it comes to the hours spent volunteering in one year, except for matures who are much more likely to volunteer. In fact, boomers and millennials are pretty much even whereas Gen Xers are less likely to give of their time (which is understandable as they are usually the most time-poor as they are in the midst of raising a family and developing their careers).

Millennials are the first generation to really grow up in a digitally connected world. The

Internet came online for commercial use about 2 decades ago, when the oldest millennial was just 15 years old. And the youngest millennial is just 17, so their lives have been lived connected to technology.

“When a millennial supports your organization, they want you to connect with them.”

So put that together with the amount of time millennials are on the web checking out their favorite site and it’s no wonder that more than one-third (36%) of millennial donors say that they were influenced by a charity’s website to give a gift to that charity. That’s massive compared to other generations. About 1 in 4 Gen Xers say the same, and only 14% and 11% of boomers and matures, respectively, say the charity’s website motivated a gift. 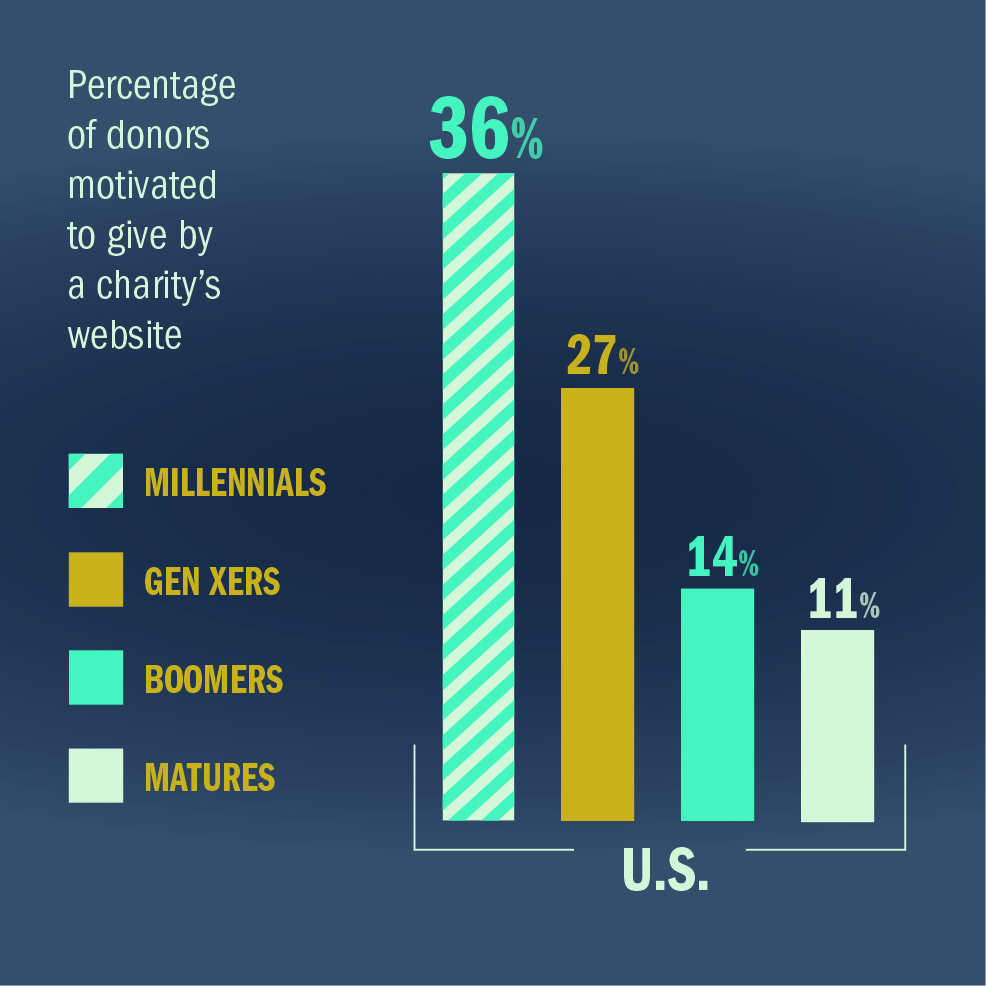 I need to park here for a moment because there are all sorts of implications that flow out of this finding. Let me highlight three.

First, you need to be thinking about what you are putting forward on your website to someone who is a first-time visitor (as that is the overwhelming majority of traffic on most charity websites). Is it perceived as high value? Is it focused on the why of your ministry (the outcomes of what you do, like lives being transformed) versus the what (i.e., programs that deliver services)? As Simon Sinek, in his now famous TED talk makes clear, people buy (or give) because of why you do what you do, not the what. You need to woo the visitor with compelling content!

Second, more than likely the person coming to your website is viewing it on a mobile device—especially a millennial. Therefore, it is mission-critical that your website is mobile-optimized if you are serious about connecting with millennials. This is especially critical if you want them to subscribe to any communications or donate.

Third, speaking of donating, in addition to your website being mobile-optimized, it is absolutely non-negotiable for your giving form to also be optimized for mobile devices. Our study found that a whopping 37% of millennials had given an online gift through their mobile device. And you can bet that percentage will only increase.

In one of the more surprising findings of the study, millennials expect charities they support to communicate with them through mail and phone. As you will see in the chart nearby, 51% of millennials expect to receive a mailing at least once a month, more than any other generation! In addition, a massive 81% say they expect a phone call at least once a year from a charity they support. And they are the generation that is more welcoming to e-communication.

When a millennial supports your organization, they want you to connect with them. And they are happy for you to use traditional channels to do that. And when you think about it, mailboxes today are relatively empty compared to a couple of decades ago. This means when you mail, you are more likely to stand out. Compare that to your email inbox which is stuffed full every day. 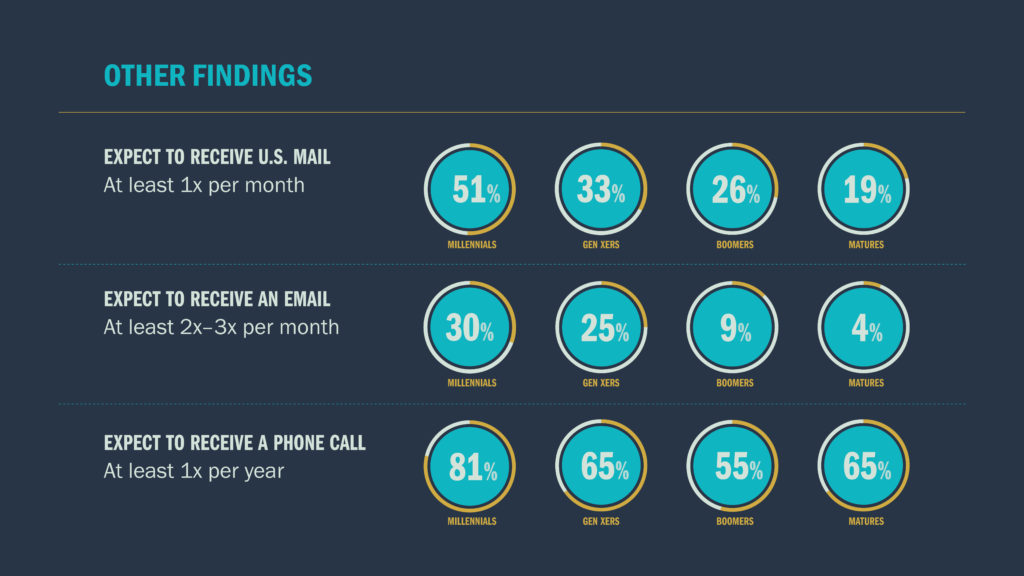 These are just four of a whole host of findings coming out of our Millennial Donor Study. There’s no doubt that millennial donors really are not who you think they are.

Rick Dunham is a 39-year veteran in fundraising and organizational development for nonprofit organizations. He is CEO of Dunham+Company, a company he founded in 2002. Today, it has become a global leader in providing fully integrated fundraising strategy for nonprofit organizations, serving more than 50 organizations in the U.S., Canada, United Kingdom, South Africa and Australia. Rick holds a BA from Biola University and a Th.M. from Dallas Theological Seminary. He serves on the board of The Giving Institute and the Giving USA Foundation. Learn more at www.dunhamandcompany.com and see Dunham+Company research at www.givingresearch.net.

Don’t miss the Chief Development Officer Forum for which Rick Dunham will serve as a panelist during CLA’s The Outcomes Conference in Dallas, Texas, April 17 – 19, 2018. Learn more >>