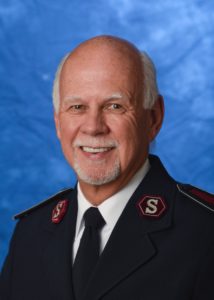 As National Commander, Hudson leads a network of more than 3,500 officers, more than 65,000 employees and nearly 3 million volunteers serving in more than 7,500 centers of operation throughout the United States. He also acts as chairman of the national board of trustees and presides over triannual commissioners’ conferences which bring together the key executive leaders of The Salvation Army’s four territories in the United States.

Commissioner Hudson has been an officer (ordained minister) in The Salvation Army for 43 years. Prior to coming to National Headquarters in Nov. 2015, Commissioner David Hudson was the Chief Secretary for the Western Territory of The Salvation Army, U.S.A. The Hudson’s have a wide range of experience as Salvation Army officers, including several territorial and divisional appointments. Prior to those appointments, the Hudson’s were corps officers for 14 years, including appointments in Oregon, Idaho and Southern California.

Commissioner David Hudson has a Business Management degree and a Master of Science degree in Organizational Leadership.

What are some key ways The Salvation Army, USA is advancing its vision today? What initiatives are you most encouraged about?

The Salvation Army served over 24 million people in the USA last year. Many of these people received the temporary assistance they needed and are now back on their feet, but others remain trapped in the throes of intergenerational poverty. As a result, the Army began Pathway of Hope, an intense case management program. Since inception, the Army has worked with over 6,000 families in 500 locations across the country to take the necessary steps to create and achieve goals that lead to greater stability. We’ve brought hope to parents, which creates an environment that leads to a better future for their children. New members have been welcomed into our church families. Through a strength-based case management model, we’ve reunited families, helped parents find stable employment and housing, and provided children a place to learn new skills and make friends through character building programs. Pathway of Hope literally does the most good, one family at a time.

Partnering with organizations throughout the country helps leverage our resources to meet human need. One example is the Army’s partnership with the Urban League, Lutheran Hope Center and the University of Missouri in opening the Ferguson Community Empowerment Center on the site of the QuikTrip that burned during protests a few years back. We’re working together with these partner organizations to bring healing to a community, as well as much needed services.

“Hold fast to the foundation of mission, but be as flexible as possible with methods.”

To connect with millennials, we’ve started a new program we call Echelon. Echelon is The Salvation Army's strategy to foster relationships with emerging professionals across the United States, and young professionals volunteer to lead and drive an Echelon chapter in their community. In major cities like San Francisco, California, and smaller communities like Peoria, Illinois, Echelon mobilizes emerging professionals to fundraise, volunteer, and speak as ambassadors of the Army's work to the millennial generation. The Echelon chapters create new opportunities for young adults to connect with our cause, and provide fresh perspectives on how the Army can better help our neighbors in need.

How much closer is the Army to achieving its vision and mission than say 10 years ago?

That is a difficult question. The mission of The Salvation Army is “to preach the Gospel of Jesus Christ and meet human needs in His Name without discrimination.” There’s as much sin and need today as 10 years ago. So, I’m not sure if we will ever achieve mission completion this side of heaven. Our Founder, William Booth, once stated, “While women weep, as they do now, I'll fight. While little children go hungry, as they do now, I'll fight. While men go to prison, in and out, in and out, as they do now, I'll fight. While there is a drunkard left, while there is a poor lost girl upon the streets, while there remains one dark soul without the light of God, I'll fight-I'll fight to the very end!” So, to answer the question, our mission is a long way from fulfillment, as long as people are marginalized by sin and poverty. With that said, we are committed to tirelessly proclaiming the message of physical and spiritual redemption.

What might radically advance the Army’s pursuit of its vision and mission over the next decade?

The world is significantly different than it was when Sharron and I were ordained as officers over 40 years ago. Looking back, whatever success the Army’s had in the past is directly attributed to our foundation of faith, and a capacity to influence people toward living godly lives. I do not believe the future will be different in that regard. However, there is a polarization going on in the world that seems to force people into “camps.” Each of us are put into boxes based upon perceptions, and organizations are no different. One possible reaction to this is to retreat and draw a line in the sand, but if we truly want to make an impact for good, we need to do just the opposite. While we should never leave the foundations of our faith, we need to strive for what John Wesley called the “via media,” or the middle way. We must step into the divide of marginalization, of discrimination, of hatred, and demonstrate God’s love. Our mission statement, “to preach the Gospel of Jesus Christ and meet human needs in His Name without discrimination,” is not a mission statement with two parts; it is one. We are founded on the love of God, but driven by God’s love for humankind. 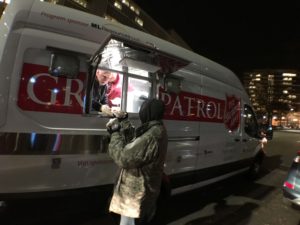 We need to be more intentional than ever in reaching out and serving people in need who do not agree with us theologically, even when doing this may not be an easy road. Jesus constantly ministered to people regardless of their background; two examples being the Samaritan woman and the lame man at the pool at Bethsaida. By “letting our light shine” just as he did, people who would traditionally never stop to hear the gospel message may do so.

We should increase our outreach to people. By this, I mean we need to go where they are and not wait for them to come to us. Like many other organizations, we can become somewhat facility based. This not only ties up our resources in facilities, but also in personnel to operate them. We’ve seen great success in ministries that don’t have a physical location; rather, a vehicle and several places where services are provided. I recently visited a ministry we have each evening on the streets of the District of Columbia. In addition to personnel offering food and clothing to individuals living in the streets, a case manager is also present to assist in the initial steps for those looking to get off the streets. In California’s San Joaquin Valley, the Army operates outreach to migrant workers by using people’s homes to provide services, as well as conduct worship meetings.

Finally, the depravity of man never ceases to amaze me. To advance the mission of the Army, we need to have a passion to reach the lost that drives us to places others may not be willing to go. We need to go into places where human trafficking happens every day, but people choose not to see it. We must declare a holy war against modern day slavery, into which people are enticed or kidnapped, and where they’re exploited into both labor and sexual slavery. No one is outside God’s grace, and The Salvation Army must be a vehicle of that grace.

What are the greatest challenges in leading such a large, multi-faceted organization?

Size and speed are often at odds with one another. There’s an inherent danger for large organizations to become slow in reacting to changing times. The specific needs in society today are different from just a couple years ago, and we must be able to react quickly to address this changing landscape. Nimble is the key word. One example is the opioid crisis. Death rates from opioids increased over 70% between 2014 and 2015. Today, we have a very large population of working poor. People see economic data and believe times are good for everyone, but that’s far from accurate. Added to this, tax reform, including the virtual elimination of the charitable deduction, and federal budget cuts, present huge challenges to growing need. We must find ways to overcome these challenges to continue meeting the needs of people.

What role do your board and your local advisory councils play in shaping program direction and priorities?

A fully functioning board, with members focused on strategic initiatives, clearly know their community needs and what it takes to support our programs. Our boards bring wise counsel and access to resources needed to advance our work. As Salvation Army officers take up new appointments causing them to move often, our boards bring continuity and easier assimilation of our officers into communities. It is no coincidence that the locations that have strong boards also have the most effective services to the community.

How would you encourage other ministry leaders to stay focused in the pursuit of their kingdom calling?

A few years back a business leader in Hawaii asked me the mission of The Salvation Army. After I told him, he asked me what the mission was of another well-known organization. I was embarrassed to say I didn’t know. His response surprised me, “That’s right, they’ve lost it.” He looked me in the eye and said, “Never lose sight of your mission; if you do, close up shop and go home… mission is everything!” So, I would first say, never forget your mission. Second, know the difference between methods and motivation. The motivation of The Salvation Army has never changed, and hopefully never will. Our Founder said, “Go for souls, and go for the worst.” Our motivation is driven by the love of God and the grace he freely gives to others. With that said, our methods can become outdated. Early day Salvation Army was known for its street corner ministry; with the decline of sidewalk retail business, you would be hard-pressed to see people on the street. If we want to reach people today, we will need to go on social media outlets like Facebook, Twitter, or YouTube. Tomorrow the platform will be totally different. Hold fast to the foundation of mission, but be as flexible as possible with methods. Third, the thing that sets faith based organizations apart from others is their foundation in Christ. Lose sight of that, and we become no different than all the others. There is a great amount of need in the world today, but what it needs more than anything is the love of Jesus.